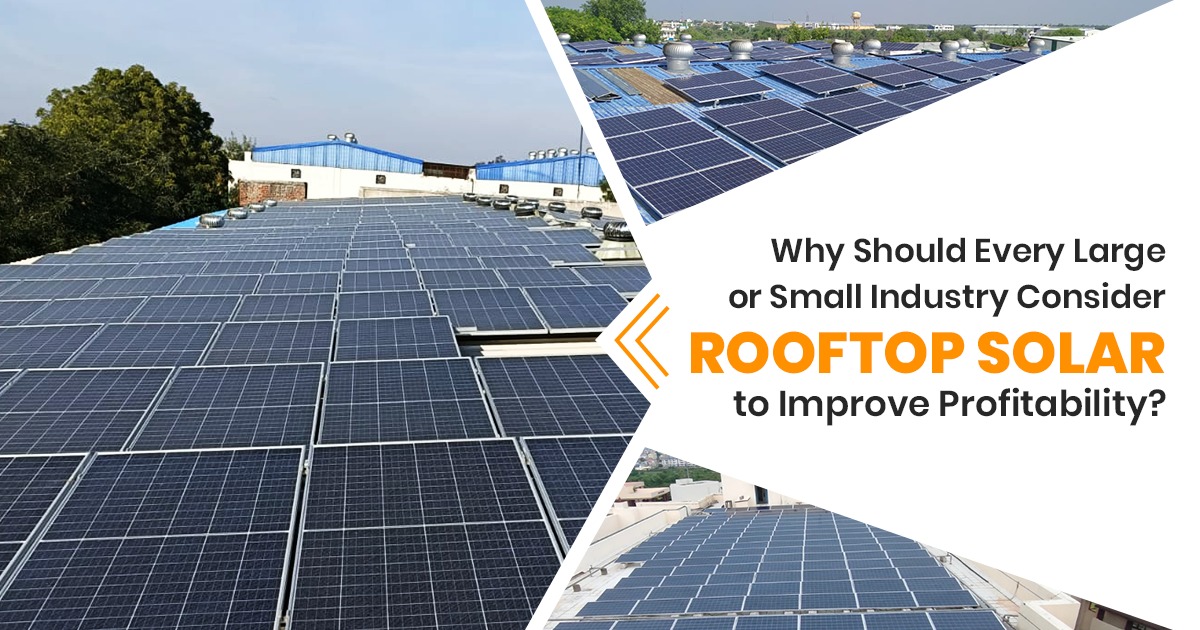 Why Should Every Large or Small Industry Consider Rooftop Solar to Improve Profitability?

Industries make up more than 45% of electricity consumption in India. India is a very large center for the production of various goods and services, due to which, India has a large amount of small and large scale industries. The landed electricity tariff for industries is Rs 10, per unit. Industries have two types of consumers: High Tension Line and Low Tension Lines. The taxes vary per state, most of the Indian Power generation plants run on coal. Electricity sees a hike of 4% in its taxes per year due to increasing rates of coal.

Some industries have their own large connected loads, some of them fully use their power requirement through diesel generators.
The industries have big enough rooftops suitable for 100-300-500 KWp solar installation.
Industries can be powered through solar energy if connected to the low-tension side or through a smart controller to a diesel generator that either reduces the total consumption of electricity or the consumption of diesel or both.
In the case of a larger rooftop, even more than 1MWp capacity can be installed under net metering or as a Captive power plant. As a captive power producer and a profit-earning organization, the industry can also claim accelerated depreciation which increases the savings that are generated from Solar.
Solar RECs can be earned that can be traded in power exchange at the market rate. Therefore, solar is not just a clean energy source but it also provides good hedging which in turn provides cost-savings for the industries.

Other Benefits of Solar Installations

It is a secure investment.
It increases our access to energy
Reduces Carbon prints
Low Maintenance Cost
A clean source of Energy
Suitable for Indian Climate
Multiple applications of Installations
Cost Savings

Why do we need Solar Companies?

The expertise provided by solar companies for regular and optimum management of solar panels. All solar experts have extensive experience in performing corrective measures and maintain the upkeep of Solar plants. The services provided by these companies are automatic as well as manual system checks to ensure the plants are in accordance with international standards. We need these companies to get the optimum use of solar energy and to make India energy efficient according to the Indian Government’s goal.

Progressive net metering policies will be very beneficial for the sector going forward. India aspires to achieve energy security by the year 2022, for which net-metering is imperative. The Indian government has proposed certain solar power projects which will aid the solar economy rapidly. Some of these programs are The Thar Desert solar power projects that are estimated to generate 700- 2100GW; the Jawaharlal Nehru National Solar Mission is launched by the center with the target of generating 20,000 MW of solar power energy. With this program, India can achieve energy security in the near future.