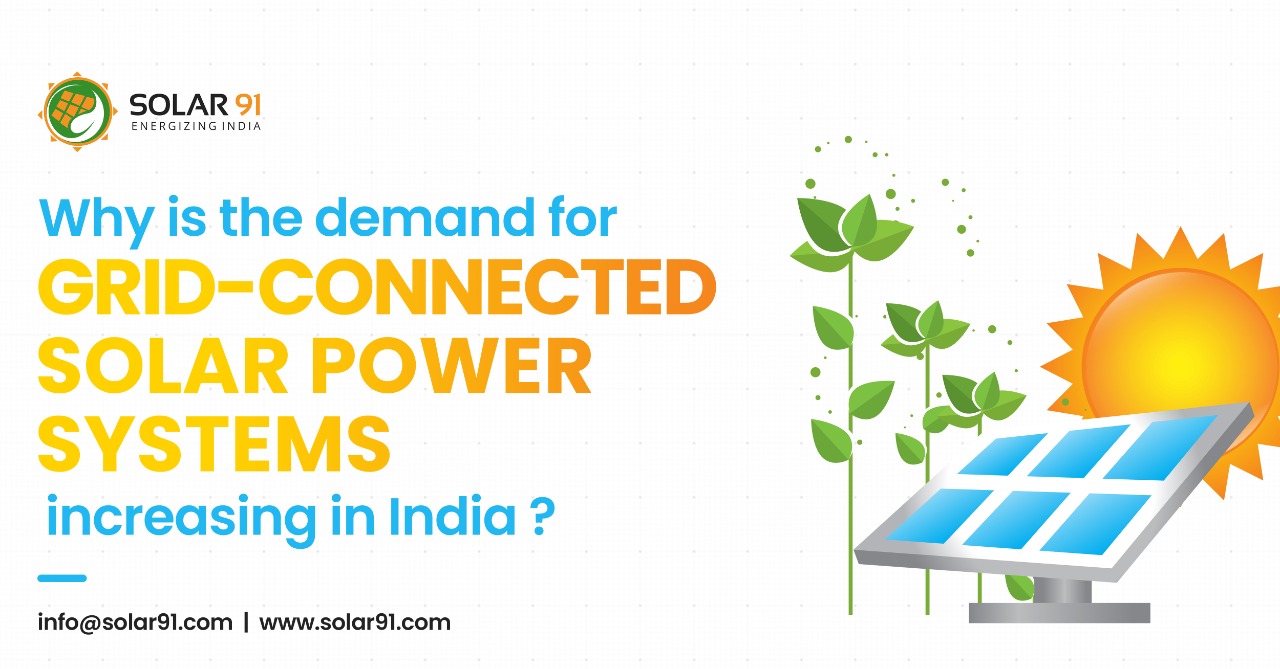 Why is the demand for grid-connected solar power systems increasing in India?

Technology in the field of energy conservation is developing and growing for the betterment of our environment. The world is shifting towards Solar Power. Plants are getting installed in ‌residential, agricultural and industrial estates. Modification towards solar energy is helping to reduce pollution and harmful gases from the environment. As a result, solar technology has become cost-effective over time, and even the installation process has become less complex.

The central government is supporting, and promoting solar plants as an initiative for environmental benefits, plus economic norms – also providing subsidies from 30 to 70% depending on the state.
Since the concept of a grid-based solar power system was put into action, it has become advantageous for its users as well.

What is a Grid-Connected Solar Plant System?

A utility-grid-connected power system is an arrangement that helps to circulate the electrical energy from the consumer’s plant to the power plant and from the power plant to the consumer’s Grid-Connected Solar Plant. The most important benefit of grid-connection is ‌that it generates energy, stores it and then transfers the reserve to a grid-power plant, and the power plant gives the supporter credit for the transferred energy. On-Grid Solar Plants fulfil the need even between the diversity of commercial rooftop systems, small residential units to large utility-scale solar power stations.

The servicing cost is low because ‌grid-connected methods rarely involve any integrated battery solutions. A grid-connected power system, when in favourable conditions, supplies a superpower to the electrical utilities for the consumer’s establishment.

An excessive amount of electricity is required for an industry to function fittingly. The consumption leads to more monetary liability against the electrical department, and it is also bad news for the environment. But that’s where energy conservation supplies chip in. Solar Power Setups are easily accessible and penny-wise.

There are 3 types of Solar Plants:

The On-Grid Connected Solar Plant transfers electricity to the utility grid directly from the plant and also from the grid to the plant. There is a grid-tied inverter that converts Direct Current (DC) from the sun into Alternating Current (AC) thus, achieving power for the electrical items. This electricity is then routed to the grid, where it is supplied for day-to-day use.

One more important feature is a net meter. A device that records the energy supplied to the grid and the energy consumed. At the end of each month, the outstanding balance is recorded, and they provide the consumer with a bill.

Solar Plants are devised to minimize the cost of electrical energy consumed as the technology is cheaper than coal and gas. Solar Panels are a one time investment. After your power is solar energy-based, you will start to notice a decrease in the expenses of electricity.

Save Money, Live Better with Net-Metering:

Net-metering is a mechanism that helps a consumer, who has their own arrangement to generate electricity using renewable energy sources, to transfer their stock of remainder-energy back to the grid and the grid provides credit in return.

Solar energy is cheaper than any other conventional energy sources. The reduction in the price of electricity expenses will eventually result in a return on investment. The grid-connected setup really reaps the benefits when it allows consumers to store ‌surplus energy that can be sold to solar developers through the grid. Also, after the elimination of batteries in inverters, the cost of maintenance is reduced very much.

Easy To Install and Maintain:

Solar Setup is simpler to install with the equipment and skills ‌ now available to make the instalment possible with less effort. Solar Panels are least likely to require maintenance so soon after installation.
Also, there is a limited number of parts because of which the installation is simple. One more benefit is that it eliminates ‌batteries, which makes ‌maintenance easy and cost-effective.

Electricity, as a recoverable resource, can never be consumed at the point it gets over. It is better to store it, to reuse it in an emergency. The On-Grid solar power system acts as a virtual battery that can store power so it can be used later or transferred.

Grid-Based Solar Plants have a wider scope for the benefits of producing energy for electric utilities. On-Grid Connected Solar Plants are a bonzer substitute for coal and gas-produced electricity. It is an eco-friendly, electricity generator, promoting the reduction of carbon footprint, eliminating the usage of fossil fuels, and it is a cost-saving generator for consumers, which means it is a win-win choice for everyone.