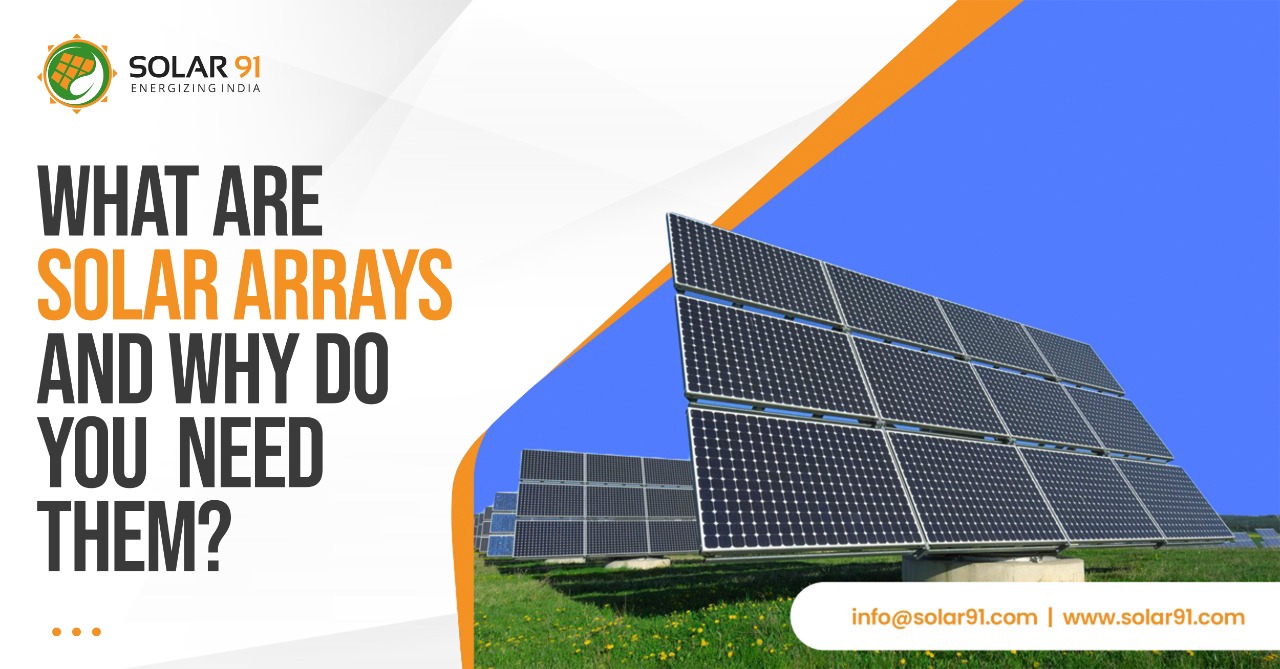 What Are Solar Arrays and Why Do You Need Them?

Renewable energy is becoming more popular as a viable alternative to electricity generated through natural gas, coal, nuclear energy, etc. As we are surrounded by a vast amount of renewable energy, particularly solar energy, we could consume this energy for the entire year and never run out. Earth is a rich source of solar energy, and we have found the technological method of utilizing it, i.e. Solar panels.

What is Solar Array?

In simple terms, a solar array is a cluster of linked solar modules made up of multiple solar panels that work together to generate electricity. While talking about solar arrays, it generally refers to the solar panel, its components, and how they are installed. Solar arrays, also known as photovoltaic arrays, are large-scale energy systems that are erected to meet the energy needs of residential and commercial buildings. The quantity and size of solar panels in a solar array are determined by the amount of sunlight accessible at the location where they are installed.
When sunlight strikes the panels in an array, direct current (DC) power is generated. The array is linked to an inverter system, which transforms DC electricity into usable alternating current (AC) electricity. The word “solar array” is frequently used to refer to large-scale solar farms, although it can also refer to any grouping of solar panels.

How does Solar Array work?

A solar array’s solar panels are made up of silicon cells, a glass enclosure, and a metal frame. The current from the silicon cells is transmitted through a network of interconnected cables and nodes. The conductive property of these silicon cells makes them ideal for absorbing and converting direct sunlight into electricity. The electrons within silicon cells are set into rapid action when solar energy comes into contact with them. As a result, an electric current is generated.

The functions of the solar array are as follows:

How many Solar Panels are needed in an array?

The amount of solar panels you’ll require is determined by the size of your monthly electricity need. If you strive to cover around 100 percent of your electricity consumption as possible, then you can be saving your maximum money through it. The quantity of panels you’ll need to cover your electricity consumption is also determined by the panels’ location. It completely depends on both your geographic region and the design of the solar panels. For example, one solar panel in the area receiving more sunlight will produce more electricity than the solar panel in an area receiving less amount of sunlight.

When estimating the production of your solar panel system, installers take your location into account and suggest a design accordingly. The array’s physical position and the direction it faces are other critical considerations. If your roof faces east/west, you’ll need more panels to produce the same amount of energy as if it faced due south. Hence, by putting everything into consideration, the requirement of solar panels in an array completely depends on a number of factors including your electricity needs.

What are the essential Features of Solar Array?

To conclude the topic, we have learned that a solar array is made up of numerous solar panels and is a part of your solar panel system. The size of your solar array is determined by your geographical location, the orientation of your roof, and your energy consumption requirements. There are multiple applications of solar arrays as discussed above. So before installing a solar array take all the criteria into consideration, also proper consultation and guidance from your solar installer will help you with it.