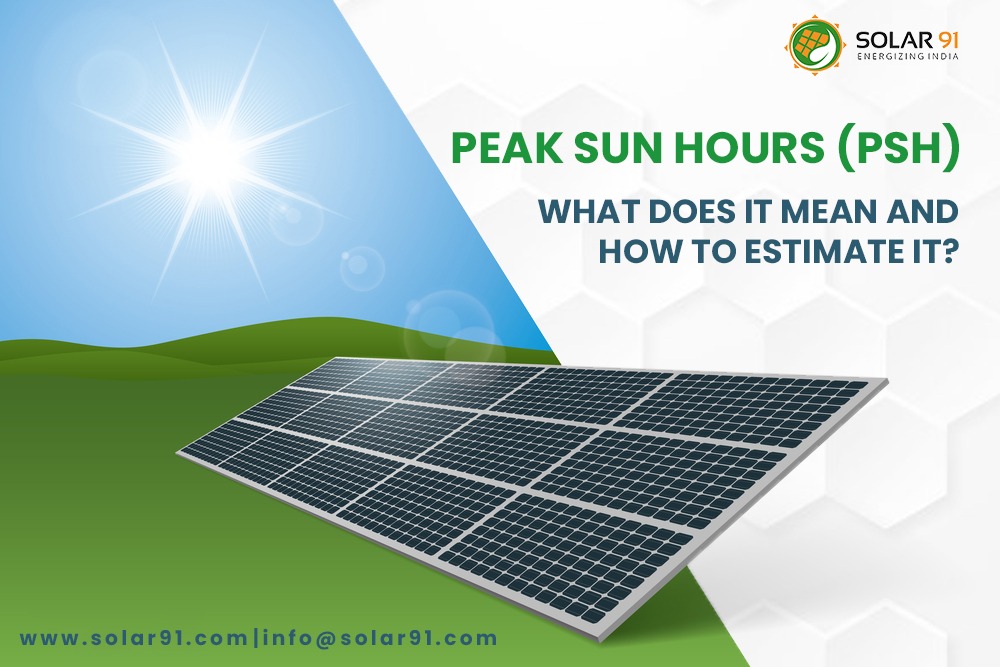 Peak Sun Hours (PSH): What does it mean and how to estimate it?

If you’re planning about getting a solar panel system for your building, then you must’ve come across this term frequently. You might even be wondering whether your area receives enough sunlight for maximum energy production. Well, it is essential to know that it is not just the total hours of sunlight received that are crucial for maximum efficiency, but the ‘peak sunlight hour (PHS)’ where you live that really matters.
Knowing the Peak Sun Hour is useful because they simplify calculations, done to power a solar panel system. PHS is in fact really important to determine the worth and optimum usage of solar panels. It is a convenient way to measure and compare the amount of sunlight received at locations.

But what does Peak Sun Hour mean and why is it really important to determine a solar panel system in your area? Through this article, we will address these questions.

How much Energy do we receive from the Sun?

It takes 1370 watts per sq meter for solar energy to reach the edge of the earth’s atmosphere. This is called the ‘solar constant’. From here, the earth’s atmosphere absorbs and reflects a particular amount of this energy. So the maximum amount of energy that reaches the earth’s surface is (on a sunny day, when the sun is directly overhead) 1000 W/m2. Other factors that affect the amount of solar energy that we receive are – area’s latitude, cloudy days, humidity, and clear atmosphere (smog, fog, and dust).

What is Peak Sun Hour?

A peak sun hour is defined as the particular time period or hour in which the intensity or solar radiance (sunlight) reaches up to 1000 watts (W) of energy, per square meter.
In other words – 1 peak sun hour = 1000 W/m sq of sunlight per hour.

Now that we know what peak sun hour is and what it represents, let’s look at how it can be used to calculate sunlight in a particular location.
As we all know, the sun doesn’t shine intensively all day, except for sunny days and when it is overhead. Also, the amount of sunlight that is directed towards solar panels is also not constant and is very fluctuating, depending on the time of the day and the weather. There are other factors too that determine the amount of sunlight received by solar panels.

At the time of early in the morning and late afternoon, the sunlight received is even less than 500 W/m2. On the other hand, during a sunny day, midday, or at noon, when the sky is clear and the sun is directly overhead, the solar panel is expected to receive nearly – 1000W/m2. These numbers can be easily defined in terms of peak sun hours.
An hour in the morning receiving 400W/m2 sunlight is equivalent to 0.4 Peak Sun Hour.
An hour at midday or a sunny day, receiving 1000 W/m2 is equivalent to 1 peak sun hour.

The peak sun hour depends and varies day by day and location to location. Hence, it is not easily predictable. As the amount of sunlight reflected on the earth’s surface depends on several factors, the peak sun hours also differ accordingly. Anyways, we can still have a good estimation of monthly and annual insolations, to help us plan a solar power system.
Lastly, the mounting of the solar panel that is its angle also determines the energy output. The surface of the panel at a 90-degree angle will receive and produce maximum output at peak sun hours.