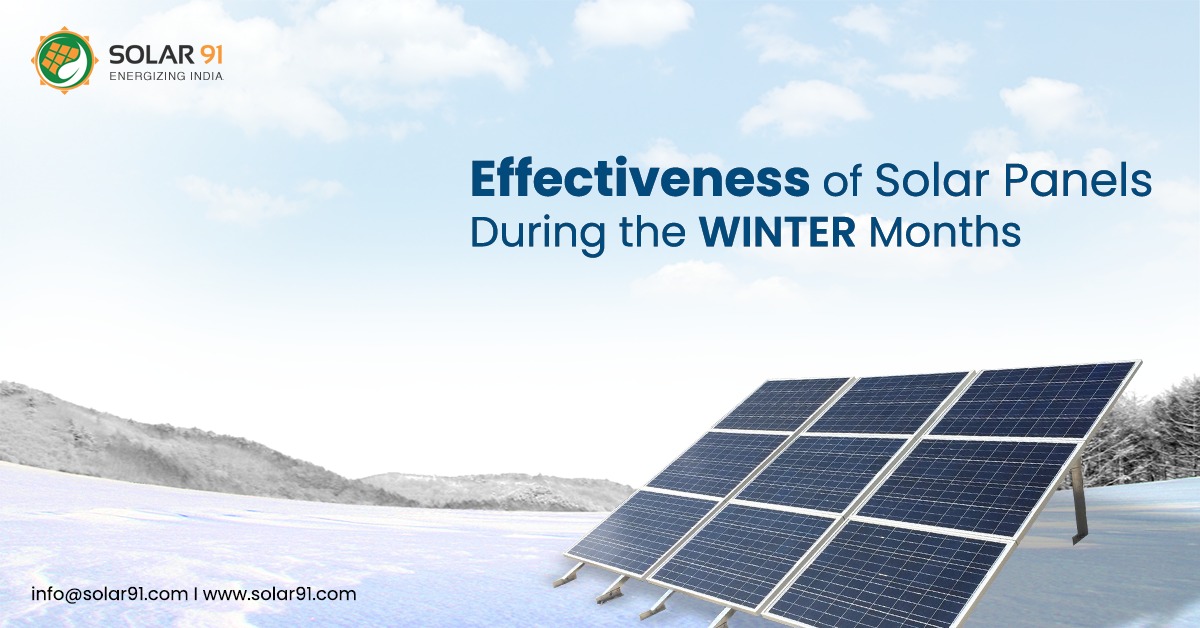 Effectiveness of Solar Panels During the Winter Months

Solar Panels are an ingenious invention for humankind. Particularly designed for sunny regions of the world, where maximum electricity could be produced through solar radiation. In this way, we save our environment and make a sustainable choice. Though it works to convert solar radiation into consumable energy, it may seem like it is only made for regions near the equator with maximum sun rays. It might also be questionable to use solar panels in areas with snowy winters.

A hot sunny day will definitely yield an adequate amount of sunrays for energy production, but these are not the only days when solar panels work on energy production to run the electric appliances. A solar panel works the same on any other day of the year to provide energy.

But do solar panels work in winter? The simple answer is – Yes, they do. Solar panels convert sunlight into electricity. As long as there is sunlight falling on the panels, the panels will work and produce electricity. It does not matter how hot or cold it is. In fact, photovoltaic panels work more efficiently when it is cold. When it comes to the production of energy from solar panels, cold weather can be advantageous. Solar panels, just like any other electric gadget, are fundamentally electronic devices. They work more efficiently in cold weather than in hotter weather, much like any other electronic equipment. Solar panel output is optimum in cooler weather conditions.

Geographical location close to or far from the equator also matters while determining the optimum output capacity of solar panels. The equipment required in the solar panel setup conditionally depend on where you are located. Yet, it is not the reason to despair. Solar panels perform well on sunny winter days.

From an economic sense, the winter months might also be the optimum time to install solar panels for homes or businesses. During the chilly winter months, demand for solar panel installation is frequently at its lowest. The typical lower cost during the winter, on the other hand, will definitely draw a good crowd. In addition, solar panels lower the cost of your bills, which is generally exorbitant due to the higher consumption of electricity.

Effect of Snowfall on Solar Panels

Although cold weather will not affect the effectiveness of a solar panel, other elements such as snowfall may have an impact on the production capacity of the solar panels. Even if you reside in an area with heavy snowfall every winter, a solar panel can still be useful. In general, snowfall does not have a major impact on energy production, however, the accumulated snow on the panels can cause a little problem. The total impact will ultimately be determined by how much snow has piled on top of the solar panel. The sun’s UV rays can still pass through a little quantity of snow until the wind clears the panels, therefore a thin dusting of snow will not create any substantial disturbances.

Also, a solar panel has to bear the weight of the piled-up snow, this can also have an effect on the production level. Solar panels are generally tilted to catch maximum sun rays, and so the snowfall can slide off the panel easily. But a solar panel with a wider edge can prevent the snow from sliding off the panels. Hence, if you’re living in areas with snowfall, it is convenient to install solar panels without frames.

Everybody knows that days in winter are comparatively shorter than summer, hence the meantime of receiving sun rays is comparatively shorter and limited in the winter. Although this reduces the amount of time a solar panel is operating at maximum efficiency. However, the amount of sunlight received is still enough for generating electricity for use. Similarly, on cloudy days, solar panels operate the same but at reduced efficiency, as it does not receive enough/direct sunlight. The crucial thing to remember is how much sun the panel will be exposed to throughout the course of the year rather than on a single day.

When installing solar panels in winter, it should be considered as an investment to reduce the amount of energy consumption throughout the year. We can conclude that solar panels are efficient during the winter but do not produce as much energy as on a sunny day. Even with solar panels working at a reduced production output due to cold and cloudy weather with the lack of sunlight, it is still a worthwhile investment and especially during the winter months.