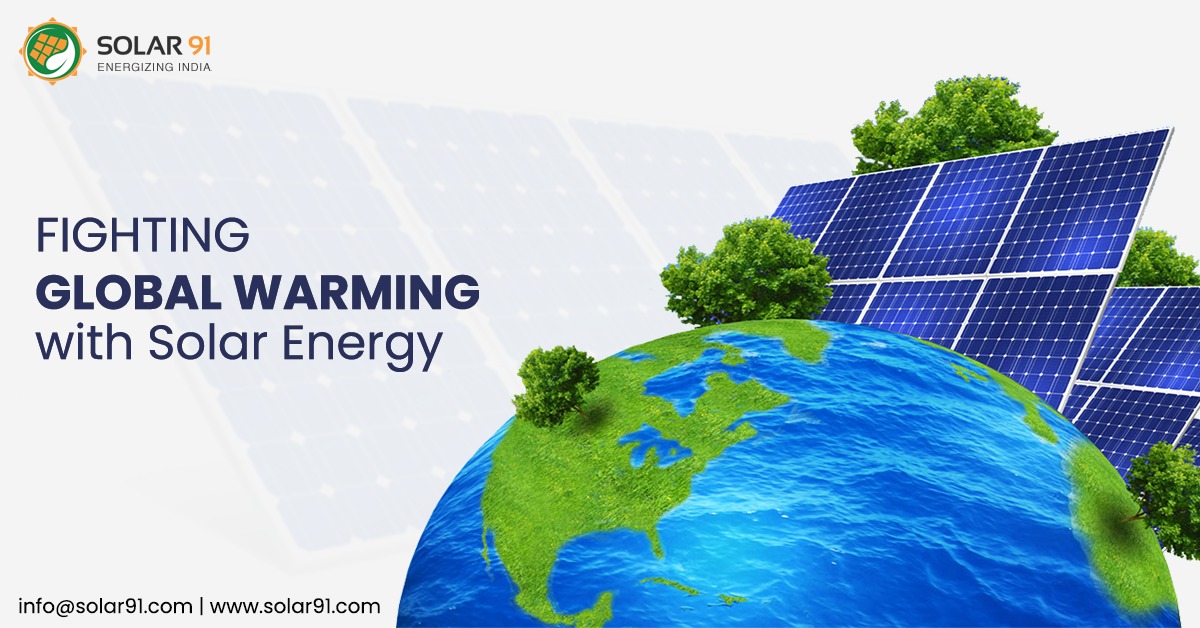 Certainly, we all are aware that global warming poses a huge threat to our planet, especially if it is not addressed and resolved as soon as possible. Global warming is a phenomenon when the total temperature of the earth’s atmosphere increases, caused by higher quantities of carbon dioxide, chlorofluorocarbons, and other pollutants, which is often connected with the greenhouse effect. The major reason that leads to the emission of greenhouse gases is the burning of fossil fuels for generating electricity. The great majority of greenhouse gases emitted are carbon dioxide (CO2), but minor amounts of methane (CH4) and nitrous oxide (N2O) are also produced.

The most feasible and efficient way to fight climate change and global warming is using renewable sources of energy like solar energy. Solar energy is available everywhere there is sunlight and space. When generating power with solar panels, no greenhouse gases are produced, unlike when utilizing coal or natural gas. Using solar energy is like letting the sun reduce global warming.

Benefits of solar energy for the environment

The use of Solar energy for the production and consumption of electricity is viewed as a crucial step toward long-term energy development, reduced fossil fuel consumption, and climate change mitigation. With the growing concern of global warming, it is vital to make a switch from using conventional energy to using renewable energy. And, when it comes to renewable energy consumption, solar technology is taking the lead. Solar has been shown to be one of the finest renewable energy solutions since it uses the sun’s radiation, which is an infinite fuel source and may help in sustainable development if consumed on a large scale.

Why is solar energy the best renewable energy:

The solar energy reaching the earth’s surface is massive. If hour-long solar energy is stored and harnessed to produce electricity, then it could power the whole world for a year. On the other hand, fossil fuels are limited and emit greenhouse gases, causing global warming. Reducing the reliance on fossil fuels and using abundant resources (sunshine) could impact our environment positively. It will promote sustainable growth along with reduced global warming.

Solar panels neither use water to generate electricity nor do they release any harmful gases, hence it has no malicious effect on the environment. It is one of the cleanest sources of energy. Unlike our traditional energy sources which are the leading contributor to global warming. Solar panels can be erected anywhere as it is an advanced technology. As solar panels do not release any greenhouse gases (mainly carbon dioxide), it reduces the impact of carbon footprint.

When electricity is generated from fossil fuels it generates harmful carbon dioxide and methane gases, which if released into the atmosphere can cause global warming. When we use the sun as our primary energy source, we emit fewer and fewer harmful gases in the atmosphere than when we burn fossil fuels. Solar panels emit no hazardous emissions, and the more houses and companies that use solar power, the fewer poisonous pollutants from fossil fuels are released into the atmosphere. This leads to reduced air pollution and hence, controls global warming.

Harmful gases like carbon dioxide and methane, when released into the air contribute not only to pollution but also increase the greenhouse effect. Increased greenhouse gases increase the earth’s temperature. This is warming our earth’s surface faster than ever. This has resulted in catastrophic weather effects such as flooding, drought, cyclones, storms, etc. Whereas, solar panels have no such impact on the environment. It is the cleanest and efficient way to harness solar energy. Solar panels produce no greenhouse emissions, thus if utilized widely, they can assist to mitigate the effects of climate change.

Solar energy has a wide range of advantages for our planet, and especially our environment. By reducing the amount of greenhouse gases emission, we reduce its diverse impact on our environment. This can be done by harnessing solar energy. Solar energy can even sustain a 100% electricity dependence of the world. It has become more than necessary to combat global warming. Solar energy can help to lessen our dependency on fossil fuels and lower energy prices for years to come by lowering greenhouse gas emissions, improving air quality. Fight Global Warming by going Solar.