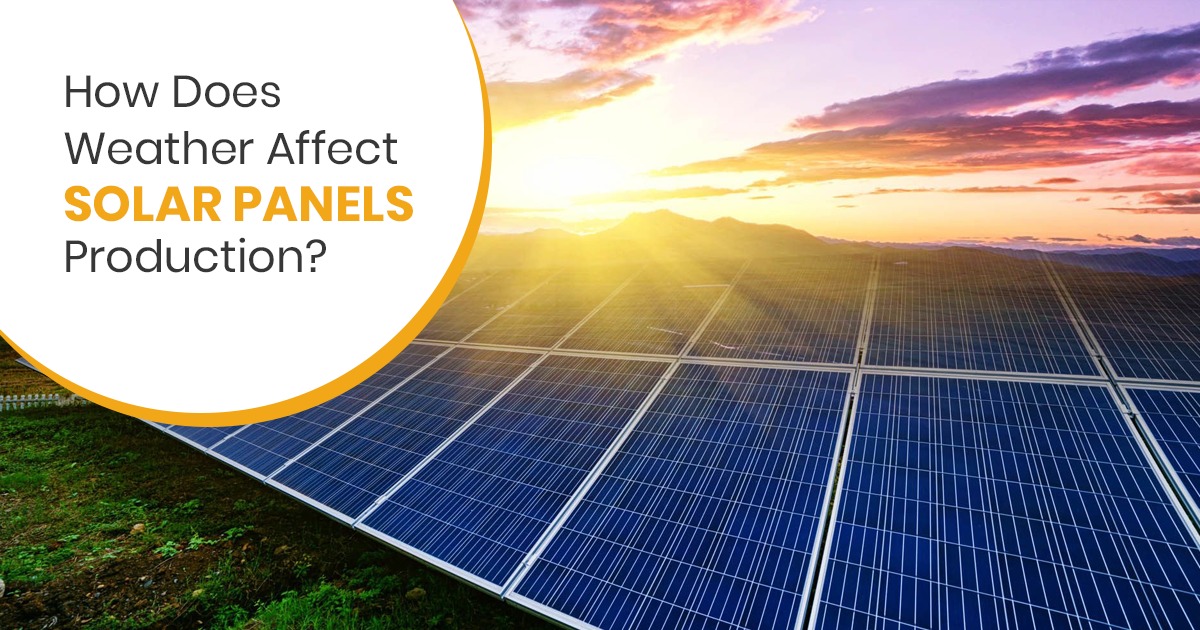 In an hour, the earth receives around 430 quintillion joules of solar energy. This amount of energy is more than what a planet uses in a whole year. A small fraction of that energy reaches the solar panels depending on:
1. How efficient is the panel?
2. Its position and orientation to the sun.
3. The weather
How does the weather affect the solar panels’ performance? It depends on various factors such as temperature, cloud cover, along with certain others

What is the ideal weather for Solar energy production?

The solar panels are more effective in summer than in winter, even though the panels generate more electricity in cold weather, the amount of sunlight and the cloud cover affect its production. In the summer the sun rays are direct with almost all day of sunlight falling directly on the panel, it produces more energy even though they do not work as efficiently as cold weather, it certainly produces more electricity.

If your solar panels are being covered by the shade of a tree, clouds, or on a partly sunny cloudy day, your production can drop 10-25% depending on the overcast.
.But something called the “edge of cloud” effect can actually intensify the sunbeam and can lead to a brief increase in electricity production. When fluffy cumulus clouds cross the sun, the wispy edges act as a magnifying glass, causing a stronger beam of sunlight to fall on your panels!

Therefore, estimates are that your panels will produce about 10 – 30% of the electricity on cloudy days as it would on sunny days, still a better solution to the energy crisis is adapting to solar energy. Even if you live in an area that has less sun than the desert regions, it still is a lucrative investment because most of the Indian Subcontinent is covered in sunlight most of the year.

Solar installers should take into account cloudy weather when calculating your system’s production in your quote as well, so you will be prepared to make a well-informed decision based on your situation. If you live in an area with net metering, you will be able to use the electricity the system overproduced on sunny days to make up for electricity on cloudy days.

How do Solar Panels Work in the Rain?

While the rain itself will have no impact on the panels, the rain clouds will likely lower your production. However, the occasional rainstorm could actually be good for your solar system’s production, because it’s a no-fuss, safe way to clean your panels. Consistent rainstorms keep a layer of dirt or dust from covering the panels and blocking the light, which could lead to a decrease in production.

Not a widely viable option, scientists have been working on the kind of solar panel that could still produce electricity when it’s raining. Known as hybrid solar panels, solar cells collect energy from both the sun and the rain. As the raindrops hit the panels, the force from the impact is converted into electricity. When it’s sunny, they act just like traditional solar panels.

Unlike rain, when the rain freezes into the snow, it does not deposit or stay on the panels and block light, snow will have an impact on production beyond cloud coverage. However, depending on the weather following the snowstorm and the position of the solar panels, even heavy snowfalls will melt and slide right off your panels in less time.

Even though solar energy is dependent on the sun, it is still a great option for many homes, businesses, and farms in the cloudy, rainy, or snowy areas of the country.