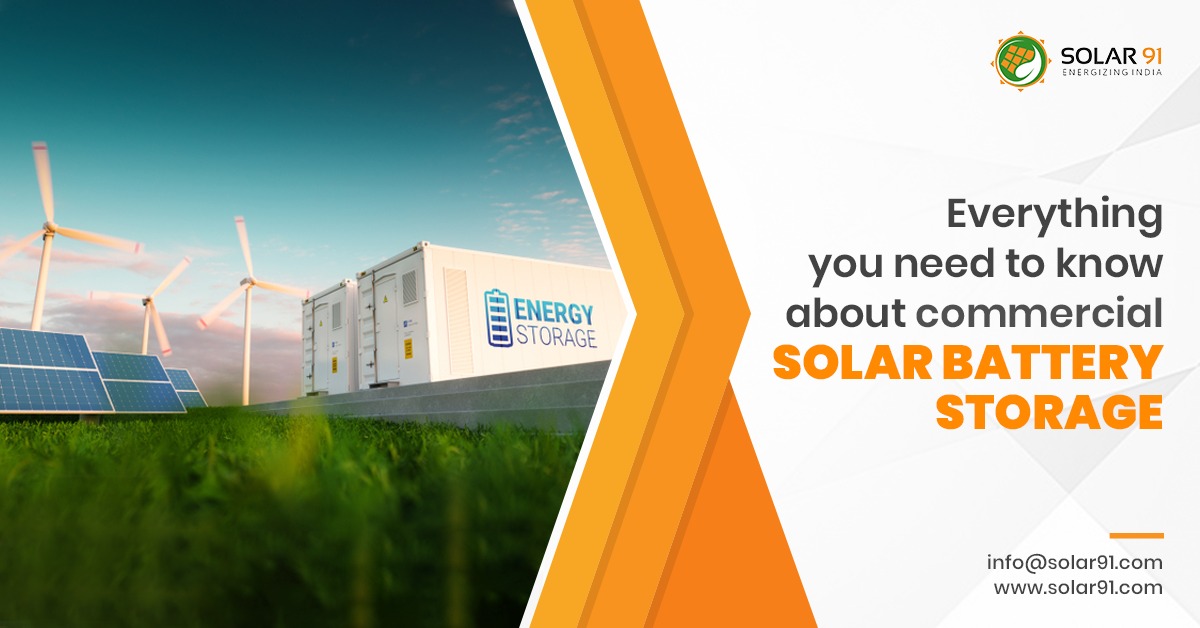 Everything you need to know about commercial solar battery storage

Solar energy is one of the cleanest and most sustainable forms of energy around the globe. Electricity charges make for a very huge part of the operating costs of industries and firms. These costs can be largely avoided by a one-time investment in solar energy.

What is solar battery storage?

How does it work?

The first priority of a solar panel would be providing you with the electricity needs of your workplace. The extra produced energy might be stored for use later or might be sent back to the electricity grid (this is called net metering). However, the converse is also true. In the absence of sunlight, when your solar panel isn’t able to generate sufficient electricity, electricity is drawn from the same electricity grid to make up for the lesser power being generated by the solar panel. However, if there is a solar battery storage present, the need to draw power from the grid won’t be there anymore. The reason behind this is simple. In cases when there is plenty of sunlight available, the extra energy generated is stored in these batteries rather than directed to the grid. It is stored in AC/DC form depending on the type of battery present. In this way, in the case of low power generation, we can make use of the stored power rather than drawing it from the grid. Doing this will result in lesser electricity bills and is also a wise use of solar energy. It’s an old, simple yet innovative concept intended to save resources for their long life.

As we all know, batteries need to be charged for usage. While our places use the AC current, most batteries out there need DC power for the purpose of charging themselves.
AC batteries are a bit different than the usual ones, as they accept the AC current as it is and then convert them into DC via an integrated inverter inside them and then use it for charging.

As mentioned earlier, using solar panels for power generation and storing the extra power generated can reduce the cost of electricity bills to a great extent. However, there can be other uses for the stored electricity as well. The stored power, besides being used for household purposes in the future, can also be used for business purposes. After all, it can be counted as producing energy of your own. In this way, using commercial battery storage opens a whole new part for potential opportunities.

Solar battery storage is an essential component of the whole solar panel system and has a potential commercial set of benefits with itself as well. We hope that you liked this article. We also hope that by now, you’ve got a better idea about solar battery storage, how they have the potential to impact our electricity bills, and how they can play a crucial role in the near future as well.