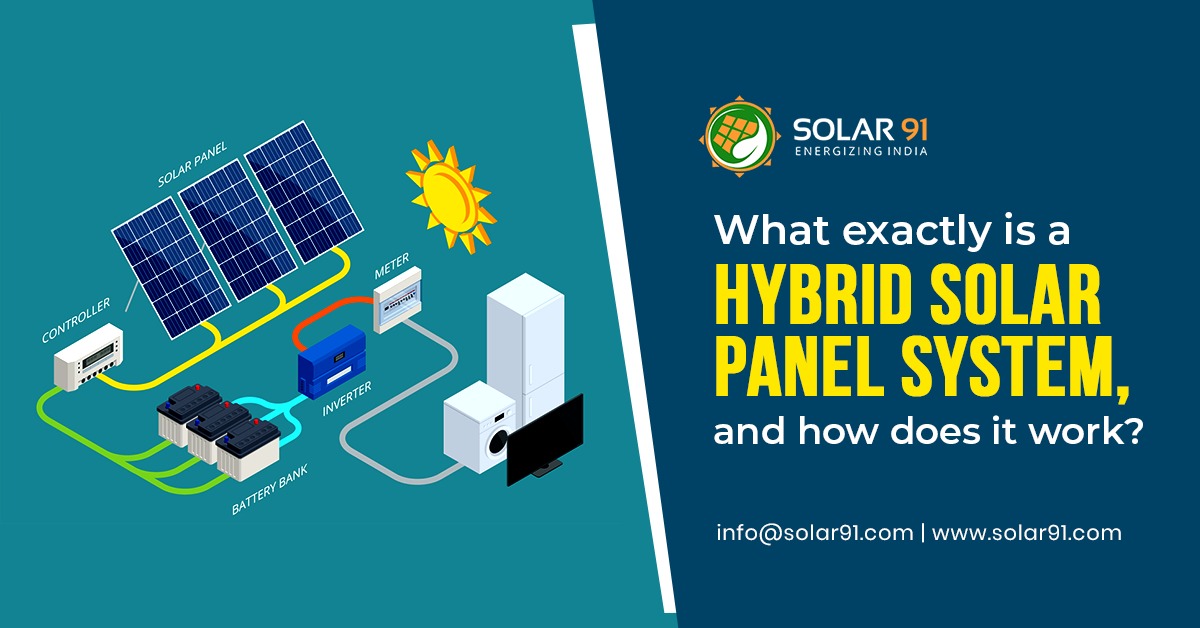 What exactly is a hybrid solar panel system, and how does it work?

Hybrid solar panel systems are similar to grid solar systems in that energy is stored in batteries for later use. Because of this ability to store energy, most hybrid systems can also function as a backup power supply during a blackout, comparable to a UPS (Uninterrupted Power Supply).

The hybrid solar panel system technically refers to two generation sources, such as wind and solar. However, the term “hybrid solar panels” refers to solar and battery storage systems linked to the power grid, unlike off-grid systems. Some people who are interested in solar power prefer to be fully disconnected from the grid. Keeping connected to the grid and investing in a battery backup system, on the other hand, will bring greater benefits.

When you’re linked to the grid, you may rely on it for backup power if your solar battery runs out. Net metering allows you to sell excess electricity back to your utility company.

The energy generated by solar panels must be converted to power for your home when they are installed. There are several options for doing this: you can stay connected to the grid, go entirely off-grid, or use a hybrid system.

A hybrid system is one in which your solar panels are still connected to the power cables of the grid and have a backup battery system to store surplus power. The energy captured by the solar panels from the sun is converted into useful electricity via an inverter. Electricity is then routed to your home, your batteries, or the grid.

You’ll consume less grid electricity than with a standard grid-connected system. While hybrid systems are grid-connected, they include solar battery storage, allowing you to maximise the electricity supplied by the panels.

A hybrid system is the most adaptable and future-proof residential solar setup. Some adjustable hybrid systems allow you to increase capacity by purchasing additional panels or batteries. Hybrid systems may also be compatible with modern solar technologies; for example, an electric vehicle (EV) might serve as one of the hybrid setup’s “batteries.”

A power management system can help you save even more money. These solutions can optimise your power consumption automatically. (For instance, larger appliances such as dishwashers can be turned on during peak daytime hours.) As a result, utility savings are higher and ROI is faster.

How Does a Hybrid Solar Panel System Works?

A hybrid solar system directs solar energy to your inverter, which then distributes energy to your home. The extra energy that is not needed to power your home is stored in your home battery. When your solar panels are not producing energy, this battery can offer power to your home. If there is still energy left over after all of these stages, it is transmitted to the grid.

A hybrid solar system directs solar energy to your inverter, which then distributes energy to your facility. When your solar panels are not producing energy, this battery can offer power to all appliances. If there is still energy left over after all of these stages, it is transmitted to the grid.

Is a hybrid inverter required to add batteries?

The quick answer is no. Using an AC battery system, a battery can be added to any existing grid-tied solar system at any time. AC batteries, such as the Tesla Powerwall 2, are becoming increasingly popular, and more solutions are becoming accessible. Because inverter technology and batteries are continually improving, it is not necessarily worthwhile to invest extra money on a ‘battery-ready system’ unless you want to add a battery within the next two years. Because battery technology is rapidly evolving, if you wait too long to install batteries, your system may become obsolete.