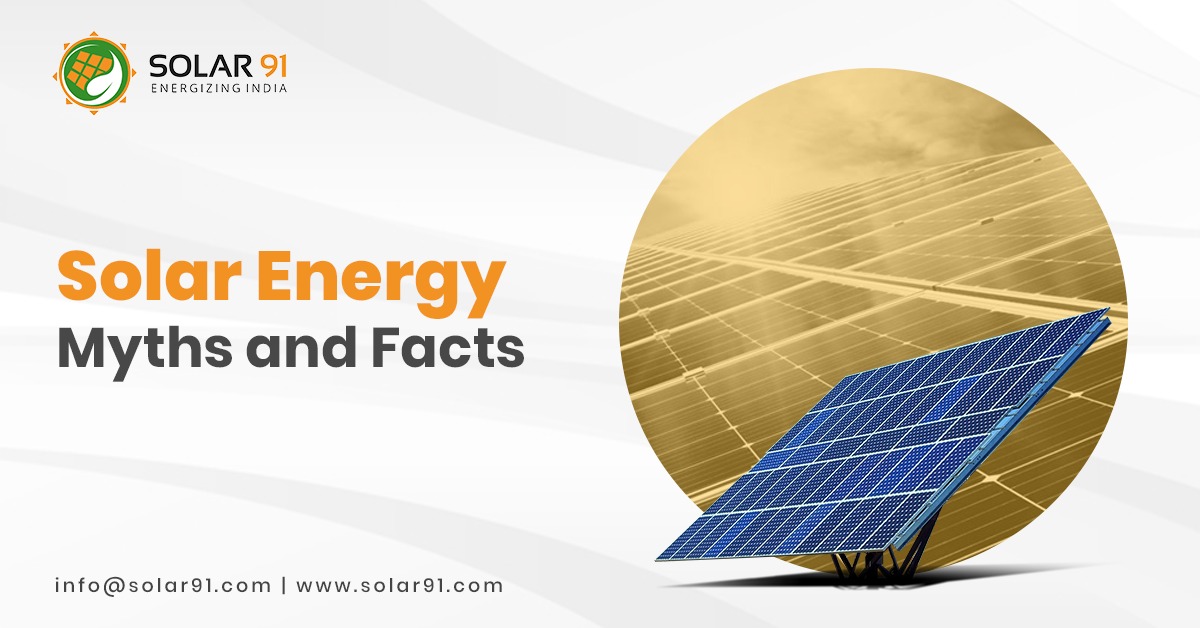 The demand for renewable energy is increasing as it is the best substitute for electricity generated through natural gas, coal, and nuclear energy, etc. Solar energy helps to mitigate the consequences of global warming that our ecosystem is experiencing as a result of growing pollution. Our earth is a wealthy source of renewable energy, and particularly solar energy, as we are surrounded by a plethora of this energy. This energy can be consumed the whole year, and we would never run out of it.

The awareness of Solar energy is rapidly growing and the myths surrounding it are following the pace. Many arguments are against solar energy and most of them are based on outdated and incorrect information.

Mythology is widely prevalent in our society. Along with these great mythologies, several solar energy myths have been passed down as well. Myths about solar energy can divert you from making a wise choice, it’s past time for us to address them.

Fact – In the event of a power failure, a building powered by a grid-connected solar power system will lose power. During daytime power failures, buildings that are completely off the grid (off-the-grid) or run on a hybrid system will continue to use solar power. For 100 per cent uptime, backup batteries can be connected with a grid-tied system. You’ll have power even if there’s a power outage if you install backup batteries.

Fact – Solar panels use the sun’s light rather than its heat to generate electricity. Solar panels lose efficiency as the temperature rises. During overcast or rainy seasons, solar panels operate at a 50% efficiency level. Moreover, the additional energy produced during summer is stored as credit and is used subsequently during the period when optimum energy is not produced.
Therefore cities with moderate annual temperatures like Banglore are more suitable for harnessing energy the cities like Chennai with excessive heat temperature.

Fact – A solar panel system meeting almost half of the building’s needs would eliminate approximately half a ton of sulfur dioxide pollution from the air. On the other hand, Pollutants produced during the production process, are negligible and mainly recycled.
In fact, a typical study for solar panels and solar energy consumption concludes that an investment in solar energy is clearly a wise investment with great environmental benefits.

Fact – The simple answer is Solar panels do work on a cloudy day, the simple takeaway is that they do not perform as well as they do on bright sunny days. Solar doesn’t require bright sunny days to produce energy. In reality, Germany is the world leader in solar power, despite its cold and cloudy climate. In some cases, clouds can actually help solar panels to work efficiently than standard sunny weather. A cloud can reflect or sometimes even magnify sunlight, which results in additional power output. Snowy conditions actually help solar panels work better because sunlight reflects off of the snow.

Myth #7 – Solar panel will cause damage to your roof

Fact – Solar panels help to safeguard and preserve the section of the roof that they cover. Because the panels are not directly attached to the roof and are simply installed on top of it. The panels, in fact, can be easily removed, if it needs to be shifted or requires maintenance. Always make sure that your roof is damage-free before installing a solar panel system.

Fact – Solar panels are not mobile, as they don’t have any moving parts and hence do not require regular maintenance. Typically, the recommendation is to clean the panels once a year, instead of relying on the rain to do the job. Obviously, over time some dirt and debris will accumulate over the panels, just clean them off with a long-handled brush, and use biodegradable soap to wash it properly.
Hence, it is not necessary to clean solar panels frequently, just keep a check in some time and that will do.

Encouragement of false myths about climate change, renewable energy, and clean technology might hinder our efforts to become more sustainable. Instead of falling into false claims and myths, contact a vendor or a guide, to get a better understanding of it and then make a wise decision.
So, if next time you hear something weird or unlikely about anything, take a few minutes to think about it, consult someone, and then make a decision for a better future.