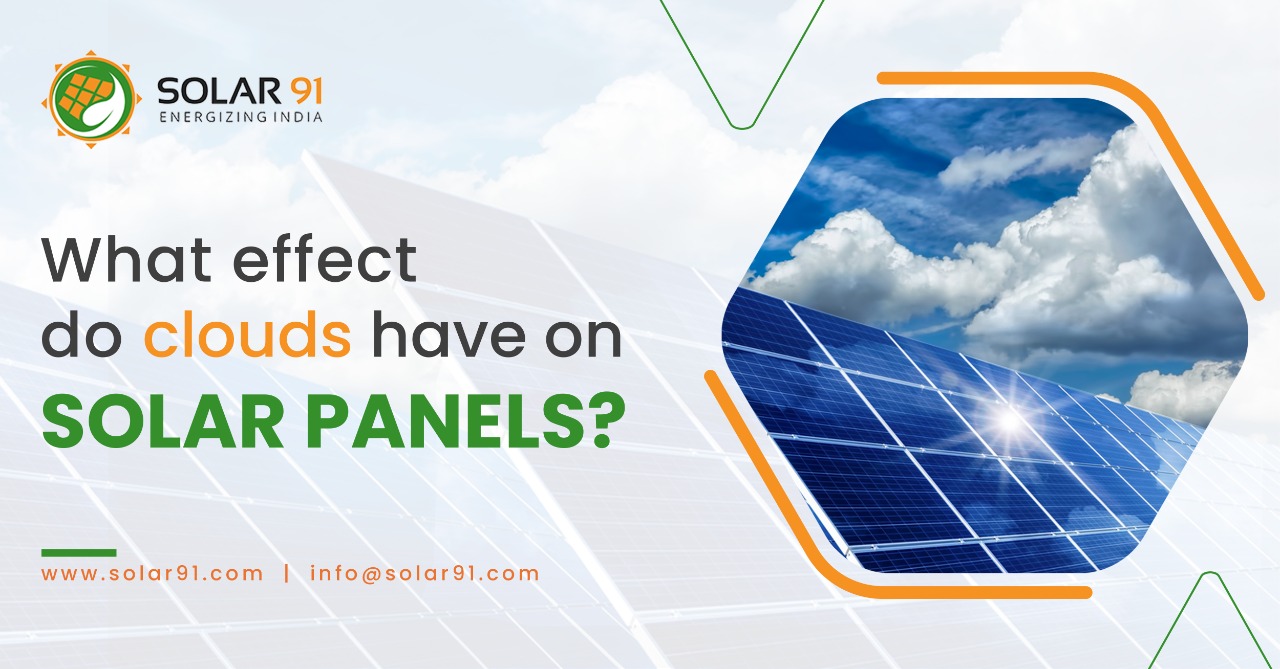 What effect do clouds have on solar panels?

Solar panels have numerous advantages, both for individuals and for the entire world. Solar panels have the potential to reduce the cost of electricity for any commercial as well as household use, as well as it provides us with cleaner, more sustainable energy that does not cause further environmental damage. But to use this energy source to its full potential requires many factors in favour, such as – weather, clouds, tilt angle, etc.

Cloudy weather used to have a negative impact on solar panel performance, but today with the pool of advanced technology, solar panels aren’t as sensitive anymore. Solar panels produce the most electricity on bright, sunny days, but they can also work in overcast conditions. Let’s have a look at how clouds and weather affect your solar panels and what kind of performance you may expect on cloudy days.

When the sun is obscured by clouds, light levels get diminished. However, power generation is not completely interrupted during this period of time. Your solar panels should work at around half of their full capacity if there is enough light to cast a shadow despite the clouds. Cloud cover that is thicker will decrease procedures even further. Solar panels will eventually provide very little useable power if there is a lot of cloud cover.

How to Meet the Challenge?

The cloud challenge can be met in a variety of ways. There are some of the tactics that are used in cloudy parts of the world, these are:

What Else Should we know about Cloudy weather and Solar Panels?

If you have a photovoltaic system, keep in mind that different sorts of cloudy days have varying effects on solar panel production.
Overcast skies diminish electricity generation in general, although rain or snow can boost output. On the other hand, high-speed clouds appear to have the least impact on solar panel performance, however, this may not necessarily be the case if the clouds are made up of ice crystals rather than water droplets.
Also, it is best to assume that if you can’t detect the type of clouds or cloud movement affecting your solar panel system, this can be counterproductive and could result in inefficient energy production.

How efficient are Solar Panels on Cloudy Days?

Solar panel production could be reduced by 10% to 15% if a single cloud passes directly overhead. There could also be a decrease of about 25% or more power generation depending on the period or the time the sunlight is hidden from the panels.
On a cloudy day, you may anticipate losing anywhere from 30% to 50% of your power production. The sunlight is often hidden by high thin clouds (cumulus) that reflect light into space, even on a bright and sunny day with clear skies overhead. These clouds act as giant mirrors, reflecting sunlight away from Earth before it can reach the ground and be absorbed by solar panels.

How can You Maintain the Production Level on Cloudy Days?

The placement of a micro-inverter on each solar panel reduces the amount of electricity lost due to cloud cover, allowing power production to continue even while some cells of solar panels are in the shade. In such a situation, having an automatic monitoring system that can turn off individual panels in direct sunlight when other cells are shaded by passing clouds is the ideal choice for maintaining the energy output. This will reduce power loss while still allowing solar panels to operate at full efficiency.

Cloud cover has an impact on all photovoltaic systems, however, the impacts vary depending on the installation site and panel type. Solar panels should be positioned in a way so that they do not have any trees or structures above them that might cast a shadow.

The sun’s beams should be unhindered and direct, with no shading of cells or reflection from shaded areas, for maximum power output. If you are unable to reach this level of performance on your own, it is recommended that you seek the assistance of a professional solar installer.