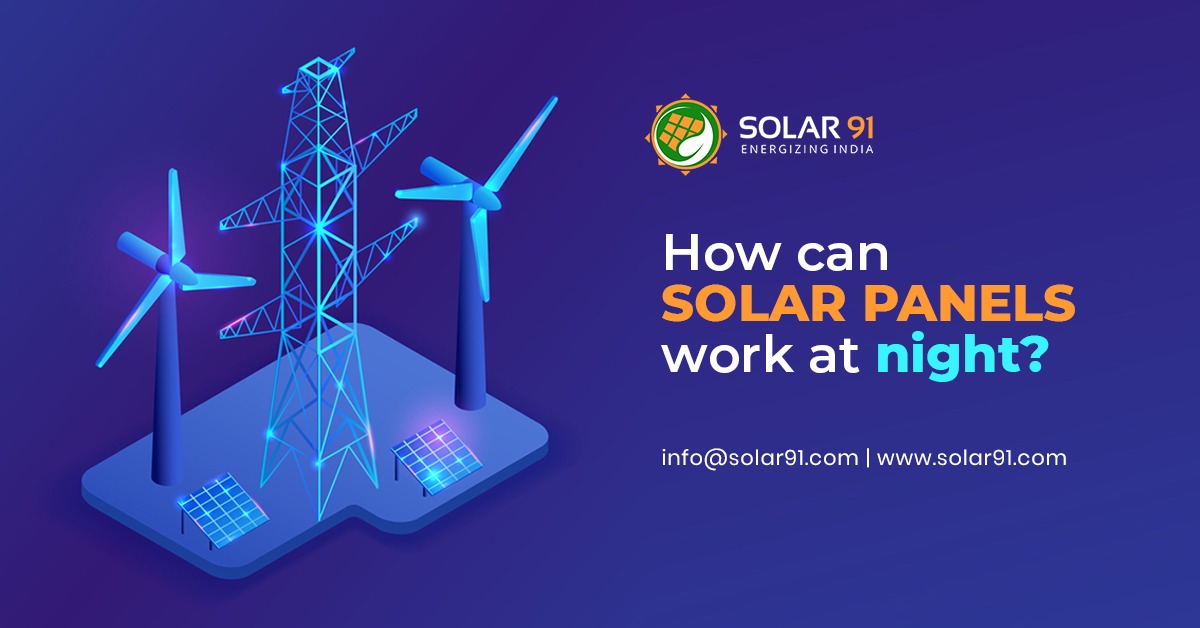 How can solar panels work at night?

This may be the first question that comes to mind while considering switching to solar energy. How can a solar panel function at night without the most important component – sunlight? Solar panels, as we all know, are completely reliant on sunlight. So, what happens when the sun doesn’t shine or when there isn’t any sunlight? To begin, how do solar panels generate electricity at night?

How does a Solar Panel Work?

The photovoltaic cell is used by solar panels to convert solar energy acquired from sunlight into electrical energy. The photovoltaic effect is the creation of an electric field by combining two oppositely charged semiconductors at a junction.

The incident sunlight’s photons dislodge the electrons in the atoms, allowing them to travel freely. An electric current is formed as a result of the subsequent passage of electrons. The electric current generated by specialised photovoltaic cells and solar panels is transmitted via proper wiring. PV cells generate direct current power (DC). Because direct current (DC) is incompatible with the majority of electrical appliances and equipment, it must be converted to alternating current (AC) (AC). This is done by the inverter attached to the solar system. The alternating current (AC) is then fed into the main switchboard, where it can be distributed to all electrical appliances and gadgets.

Solar panels work tirelessly all day to generate electricity from the sun. At night, they also support sustainable solar energy options. Through net metering and solar battery storage, you can continue to benefit from their energy production after sunset. So, how do solar panels function at night? Solar energy is transforming how we power our lives. Electric grid connection with net metering and solar battery storage both enable your solar energy system to produce electricity when your solar panels are not producing any.

How Do You Manage Your Energy Needs At Night With Solar Panels?

You are connected to the power grid via a bi-directional metre in the net metering configuration. It monitors the flow of electricity in and out. When your solar power system generates more energy than you use during the day, the excess energy is fed into the grid. The utility reimburses the transferred energy with credits or payments that are applied to the electricity bill.

At night, when the solar power system is not producing electrical energy, or when there is a power deficit, you can use the grid to power your electricity needs. The amount of electricity drawn from the grid will be deducted from the credits or electricity bill.
The net metering configuration allows for a continuous power supply. It serves as a collective storage option for the energy generated by the solar power plant. With the help of a net-metering arrangement, it is feasible to keep power bills to zero during the day if there is plenty of sunlight.

The theory underlying solar energy storage is straightforward. Most solar systems are meticulously built to generate more electricity than you require during the day. Solar panels store the excess energy generated during the day.
When your solar panels go to sleep at night, they use the energy stored in the solar battery to power your home. Some residences or structures can even run off-grid, meaning they are completely independent of the utility.

The theory underlying solar energy storage is straightforward. Most solar systems are meticulously built to generate more electricity than you require during the day. Solar panels store the excess energy generated during the day.

When your solar panels are dormant or aren’t working in the nighttime, they use the energy stored in the solar battery to power your facility. Some residences or structures can even run off-grid, meaning they are completely independent of the utility.