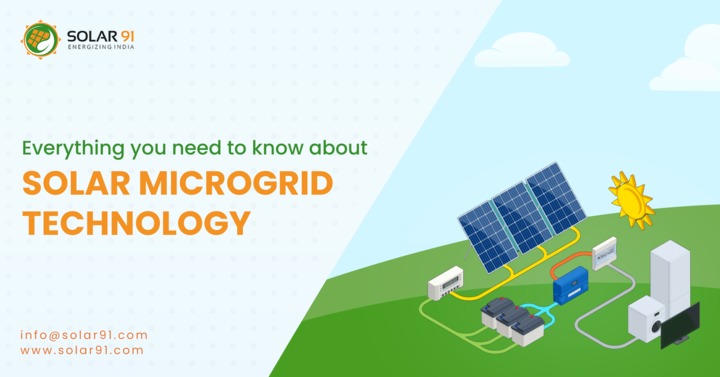 Everything you need to know about solar microgrids technology

For many years, the majority of nations relied on substantial power grids to provide their electricity needs. However, there are still many areas of the world that have faulty or nonexistent electrical grids. This is made worse by population expansion which is both economic and demographic, which raises demand, which is projected to rise by 57% by the year 2050. As decentralised technologies become more affordable, more local energy generation units, or “microgrids,” are being used. Worldwide, more than 2258 projects have been located. Because they provide a more cost-effective and dependable energy supply option than centralised power grids, these microgrids are mostly used in the industrial and commercial sectors as well as power plants to feed the energy requirements of towns and industrial enterprises.

What is a Microgrid?

A microgrid is a system for distributing energy that depends on nearby sources of electrical generation. Within a predetermined area, it is intended to function either autonomously or in synchrony with the national network. It is essential to ensure the generation and distribution of power in order to give distant or remote places the ability to safeguard their economic activity and have access to dependable energy. Profiting from clean, distributed, and renewable energy is another benefit of the system. Note: Nano-grids and mini-grids are also frequently referred to as microgrids. There is no precise definition, but we can differentiate them as follows:

Nanogrids – A single physical layer of power distribution makes up nano grids, which are isolated power domains. The size of the applications is more significant even though it is still only capable of providing limited amounts of energy. Nano grid, for instance, can be used for Solar Home Systems (SHS), in which each home is powered by a separate photovoltaic system. The most typical SHS is made of a single solar panel, a battery with prepaid electricity, and an electrical outlet, providing enough power to meet a house’s essential electrical requirements.

Microgrid – An energy supply system called a microgrid is made up of loads and distributed energy sources like fuel cells, renewable energy sources, and combined heat and power plants. Microgrids can operate independently or in synchronization with the electricity grid, ensuring the supply of local and reliable energy at all times.

How Does a Solar Microgrid Work?

Solar microgrids can run independently of the main electric grid even though they are connected to it and can merge with it. Up until the point where it is deemed necessary to convert to independent power generation or “island mode,” a solar microgrid will remain connected to the main grid. This typically occurs when there is a spike in electricity demand or when there is a power outage. You might not even be aware that your system has entered island mode because the change takes place flawlessly.

The following are just a few advantages of solar microgrid technology:

What is the Optimum use of Microgrids?

A microgrid is a system for distributing energy that depends on nearby sources of electrical generation. Within a predetermined area, it is intended to function either autonomously or in synchrony with the national network. It is essential to ensure the generation and distribution of power in order to give distant or remote places the ability to safeguard their economic activity and have access to dependable energy. Profiting from clean, distributed, and renewable energy is another possibility.

Microgrids are best suited for areas with poor or insufficient power supplies since they provide economical, dependable, and local electricity. The numerous effects of a potential network outage can be minimised in industrial buildings located in remote areas by integrating local renewable energy production and energy storage. They are the ideal option for isolated rural locations. Remote areas can now have hybrid systems that use solar photovoltaic systems or any other renewable energy source, storage batteries, and generators to provide power.

Solar microgrids are a promising source of renewable energy. However, without community participation, training, and cooperation, they won’t be viable or profitable. As you can see, the sector is always changing and the use of microgrids is continuously growing. Electricity can be produced nearby its intended use through distributed energy resources, preventing unplanned power outages.