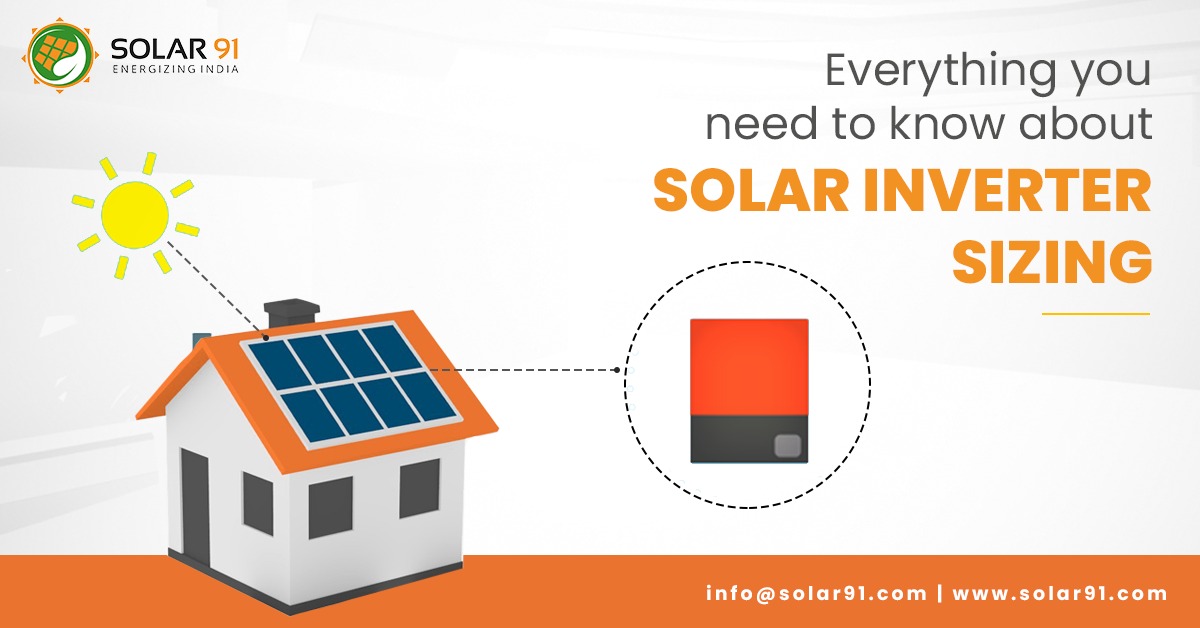 Everything you need to know about Solar Inverter Sizing

The invention of Solar Panels is a revolutionary change in the process of sustainable development. Solar energy is a renewable, affordable, and inexhaustible source of energy. Hence, almost all of this renewable energy is not put to use. It is said that – Solar energy is so cheap that it can be wasted and we are doing the exact same thing. In retrospect, it is high time that we start utilizing solar energy which is available in abundance.
It is widely known that investing in solar energy is a significant one-time investment. It is proven that solar energy can reduce the consumption of electricity, and as a result – the electricity bill. Being the most abundant renewable source of energy, it can be seized and used in several ways.

What is a solar inverter?

Why is it important to consider the size of the inverter?

How to determine the inverter size?

Solar inverters come in various sizes depending on the DC rating of the solar panel. They are available in different sizes – big and small. Solar panels are rated in Watts. Similarly, a solar inverter is also rated in Watts (W). Due to the fact that your solar energy system will be producing and transmitting DC electricity to your inverter, you’ll need an inverter that can handle the load and convert it to AC power. This necessitates understanding how to appropriately size an inverter.

Given below are the factors that determine the inverter sizing.

Geography plays a very important role in sizing your solar inverter due to its impact on the production of solar energy in the solar panel system. An area with high temperature is expected to have a large amount of solar radiation. Thus this area produces more power (electricity) as compared to an area with low temperature (further north).

As these areas differ in temperature and solar radiation, they will produce different amounts of DC at a given point of time. Hence, the solar inverters needed to convert the electricity load will also differ in size.
Under typical heat conditions, the solar inverter is likely to produce maximum output with it’s listed DC ratings. In such a case, a small sized inverter will be convenient for the job.

Another key consideration is the location. Solar PV inverter sizing is influenced by the solar array’s design and installation area. The inverter is directly affected by the tilt of solar panels, as it affects the amount of electricity produced.

This is considered to be the most important factor for sizing a solar inverter for the solar panel system. The inverter must be able to handle the whole amount of DC electricity generated by the solar array.
The inverter must have the same size as the DC rating specified on the solar panels. For example, when installing a 6-kilowatt solar energy system, the chosen invert should be about 6,000W, give or take a few watts.
The size requirements for inverters are normally listed on the product sheet, along with the array capacity they can handle. Remember that using the incorrect size will void your warranty.

What is inverter Staking?

The best way to ensure that your solar inverter is sized appropriately is to work with a professional and qualified solar installer. With the help of technical experts and a proper understanding of the solar panel system, you will be able to get the correct sized inverter. These experts will ensure that your solar array and inverter are properly designed and installed according to your supply needs, location, equipment, etc.