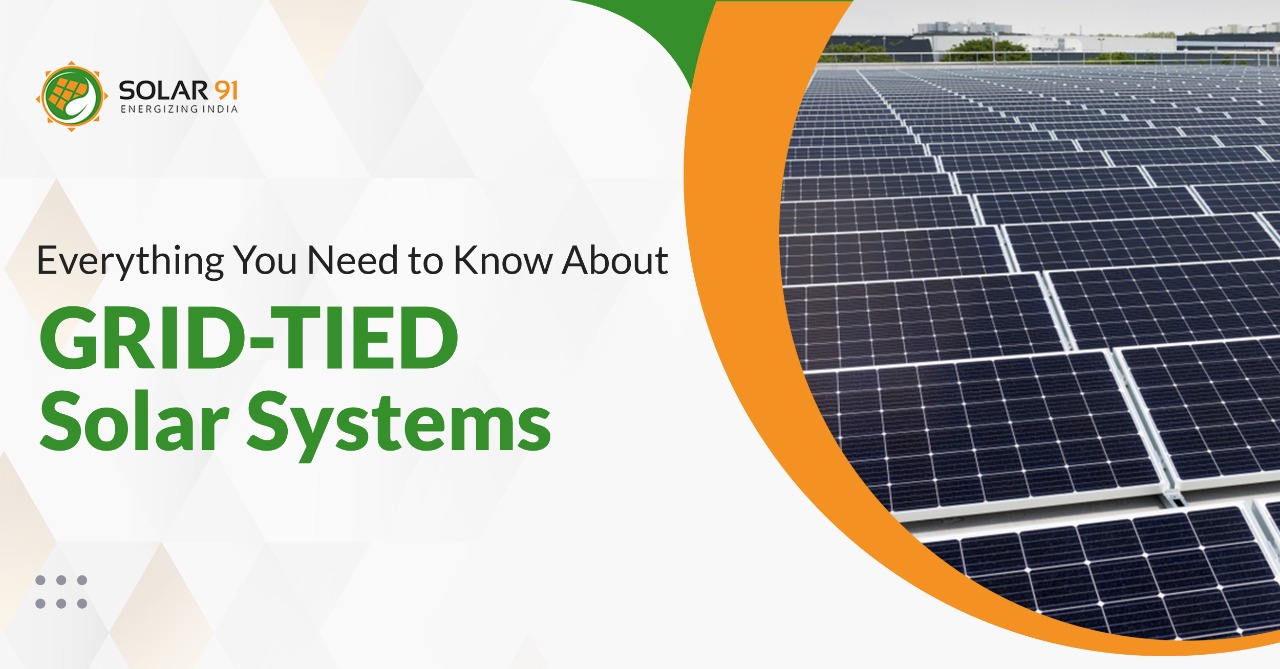 Everything You Need to Know About Grid-Tied Solar Systems

With the acquirable renewable energy sources, like solar energy, solar panels, are becoming more and more popular. This energy source helps in saving money, and protecting the environment, and is relatively affordable. In addition, adding a grid-tied solar system will raise the value of your property while reducing or completely eliminating your electricity costs. The grid-tied solar power system is the most typical renewable energy alternative for solar energy users.

Grid-tied systems are solar power configurations that are linked to the electrical grid and function without the use of battery backup tools. Currently, they are the most prevalent and convenient type of solar panels around the world. And even while battery technology is advancing, the majority of solar energy users today still choose to install a grid-tied set-up to fulfil their energy requirements.

What is a Grid-Tied Solar System?

A sort of solar power system that is inextricably linked to the electrical grid is the grid-tied solar system. Unlike off-grid solar systems, grid-tie does not require batteries. When solar energy is available, a grid-tie solar system can use it or transfer any surplus energy or power back into the grid.

The rate at which the home’s electric meter tracks usage may be slowed down by the quantity of power it supplies into the grid. When the meter “spins backwards, it indicates that electricity is being fed into the system. The utility provider credits the homeowner’s account for the worth of the power they contributed to the electrical system. The most common kind of residential solar power system on the market right now is grid-tied solar.

How grid-tied solar systems are similar to other systems

Panels installed onsite: Wiring is needed to transfer energy between the solar equipment, and the power grid. The solar panels must be mounted on the roof or as a ground mount system in a place with adequate sun exposure.

How grid-tied systems are different from other systems?

No battery storage: They don’t incorporate any type of energy storage to store solar electricity, including batteries. Grid-tied solar systems are now easier to install and less expensive as a result.

How does grid-tied solar work?

Before understanding how it actually operates, it is important to note that grid-tied is connected to an electrical grid and cannot operate without it. Thus, for the system to work, the grid should be working as well.

An energy (net) meter, one or more inverters, and solar panels make up the bulk of a grid-tie solar system. Through the photovoltaic process, solar panels, which are typically mounted on rooftops or open spaces, transform solar radiation into direct current power. An inverter is required by the grid-tied system to convert the generated electricity into alternating current.

The inverter is a crucial component of the entire solar panel system since it converts DC electricity from the panels into the power grid frequency, which varies by continent and is either 50 or 60Hz.
Solar panels generate DC electricity, which is fed into an inverter and then to a distribution board. In comparison, to an off-grid system, DC power is first delivered to the inverter and then immediately stored in batteries. In this instance, electricity is sent directly to the grid.

Does the Grid-Tied system work with battery Storage?

Unless you buy a lot of batteries, the batteries marketed for powering a home don’t store enough energy to power the complete energy requirements. The system’s cost is greatly increased by batteries. Battery-assisted solar systems are still not prevalent as a result. Because of this, many homeowners discover that skipping the batteries will yield the highest return on their investment.

A grid-tied system can be used with net metering because of the system’s two-way connection to the grid. Every watt of extra solar energy that households send back to the grid might result in bill credits. With these payments, the homeowner is able to significantly lower or perhaps get rid of their utility usage charges.

What are the advantages of getting a Grid-Tied Solar system?

The benefits of grid-tied solar panel systems are:

Grid-tied solar systems’ greatest benefit is that they are less expensive than other kinds of solar panel systems. They have the quickest payback period, the highest ROI, and better monthly savings as a result of their reduced upfront cost. On the other hand, installing a grid-tied system with battery backup can help prevent a complete loss of power in those situations where the grid goes down unexpectedly.
Regardless of the sort of solar energy system you use, you will eventually save money on energy expenditures and raise the value of your house or property.