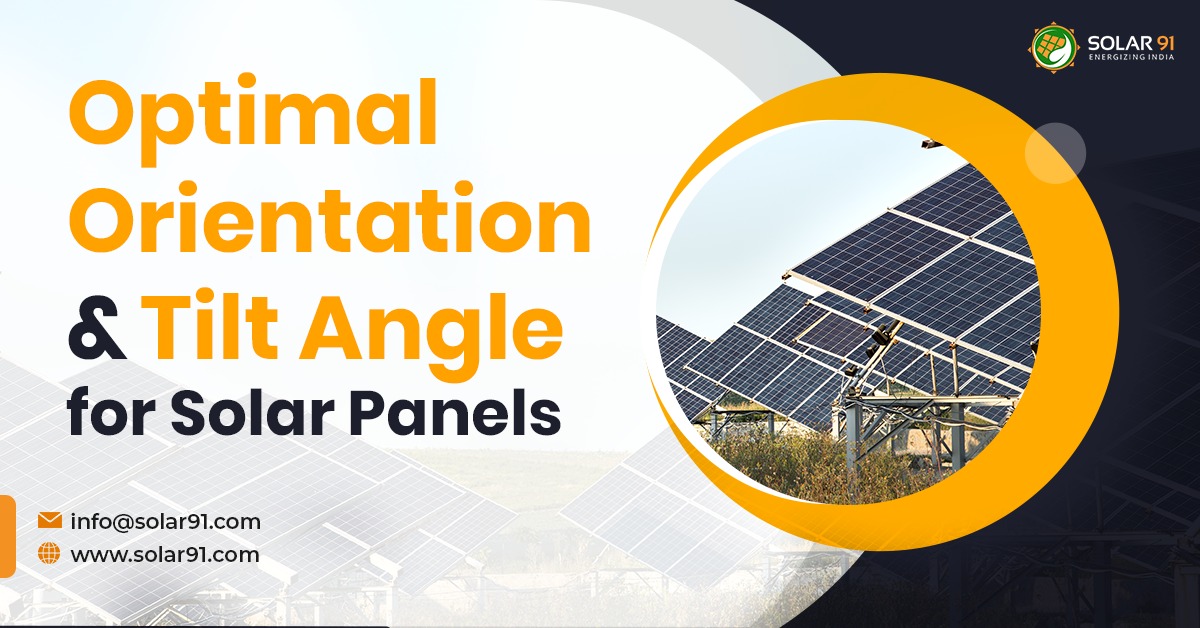 The importance of orientation and inclination of solar panels should not be underestimated in order to fully optimize energy production. A requisite of the design of any solar conversion system is its orientation and tilt surface to collect maximum solar energy. Concentrating solar collectors must be oriented to track the sun so that beam radiation is directed onto the absorbing surface. Taking consumption needs into consideration is as important as calculating its production limit. So, let’s discuss why the angle of solar panels is important and how it is calculated for optimum utilization of solar energy.

Importance of Tilts of Solar panel

While installing a solar panel, it becomes really necessary to take the angle into consideration. Obviously, the amount of radiance the sun gives varies geographically and seasonally. But the more these factors are taken into account, the more advantageous it is for energy production.

Your panel produces the most energy or gives the optimum output when it is positioned perpendicular to the sun. Certainly, the best position in this possible case is facing the NORTH, and in the countries of the northern hemisphere, it is South.

The face of the solar panel needs to be directly facing the sun so that it can absorb maximum solar energy and produce the same. For example in the northern hemisphere, at the time of winter, the sun is in low relation to the horizon. In this case, the solar panel is placed at 60° and is most suitable for such weather conditions. Whereas during the summers when the sun is radiating and is high in the sky, a low tilt of 20° would do the work.

Angle of Solar Panel to maximize the production

The choice for the tilt of Solar panel should satisfy two basic requirements:

In Solar thermal energy, the scope is to produce more heat in winter as compared to summer. Here, the angle is optimized in coordination with winter. As in summertime there already is enough sun rays while in winter it is comparatively less. So adjusting the position of solar panels becomes important in winter. As there is surplus production in summer, it is better to optimize the angle according to the winter.

The optimal tilt angle of a solar panel basically depends on two factors:

When the solar panel is placed perpendicular to the sun, it produces more electricity. The maximum energy is produced when the sun reaches its highest altitude on the horizon. Therefore we need to know the longest and the shortest sunny days so as to set the parameters for positioning the solar panel based on latitude.

How to Calculate the Solar Panel Angle?

The solar panel angle of your solar panel system differs geographically, depending on which part of the world you are in. As discussed earlier, solar panels generate the highest quality output when it’s directly facing the sun.
The sun moves low and high on the horizon depending on the time of the day and the season. Due to such a case, there is no permanent ideal position for placing the solar panel. You have to determine the direction the solar panel will face and then adjust the tilt angle accordingly. It basically depends on: a) Your geographical location, b) Time of the year with most energy consumption.

It is a rule of thumb that, Solar panels should be more vertical in the winter to capture the majority of the low winter sun, and more tilted in the summer to maximise output. Here are two simple methods for calculating the estimated angle of a solar panel based on your latitude.

Method 2 – This method generally gives better results. According to this method, The optimal tilt angle in winter is determined by multiplying the latitude by 0.9 and then adding 29°. From the above example – (56*0.9) +29 = 79.4 degrees.

So far we have discussed the importance of tilt angle and orientation of Solar panels, and its dependence on latitude of the area, seasonal changes and geographical factors. The orientation of the panels is considered important as a perfect angle will capture maximum sunlight and as a result will produce maximum energy.
However, even if you have the knowledge about calculating the tilt angle, it is still advisable to consult a specialist. Your vendor will always suggest the best solutions. Hence, work only under an expert’s guidance.